Following the successful acquisition in 2014 of subsidiaries of GLOBALE Rückversicherungs-AG (GLOBAL Re) in Australia, Canada, Switzerland and the United States, AXA Liabilities Managers (AXA LM) purchased the remaining part of the German run-off company - and announced today that it obtained the regulators’ approval for the acquisition of GLOBAL Re Germany. The transaction will be made through AXA LM’s investment vehicle AXA DBIO which invests in run-off acquisitions.

Via this transaction, AXA LM will acquire gross reserves of 98 million euros in total.

GLOBAL Re, once the sixth largest reinsurance group in the world, mainly wrote non-life risks in the US, UK and Continental Europe. It was placed in run-off in October 2002.

Founded in 2001 to manage AXA’s run-off business, AXA LM has just signed its 15th acquisition on the external market and its 9th with a German seller. AXA LM thus reinforces its position as the leader in the Continental European run-off acquisition market and will actively pursue the acquisition of new portfolios, which confirms its ambitious strategy.

“We are very pleased to have finalised this additional acquisition from the shareholders of the GLOBAL Re Group. This deal further evidences the appetite of AXA LM to acquire run-off portfolios and its strong position in the German market”, said Cédric de Linares, CEO of AXA LM.

About AXA LM
AXA LM is an AXA Group company specialising in non-life (re)insurance legacy business acquisition and management. Since 2001, AXA LM integrated more than 20 portfolios in 9 different countries totalling above 8 Billion euros. The company is headquartered in Paris and has also teams in the USA, the UK, Switzerland, and Belgium.

Further details are available on the AXA LM website at www.axa-lm.com. 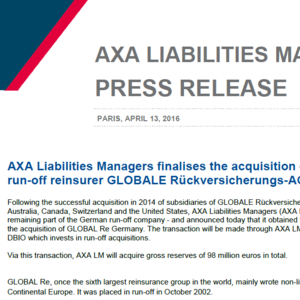